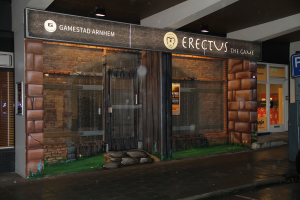 Maata Games BV will be releasing an online game named Erectus™ in the spring of 2015. The game tells of the dramatic encounter between the Homo sapiens and Homo erectus that happened on earth 130.000 years ago. In the run-up to the game’s release, the company will be hosting a worldwide competition, the best drawing and the best name will be chosen and used by Maata Games BV in the Erectus™ game or used as inspiration for editing to create fitting elements in the game.

The worldwide contest and prizes

The contest will run from Monday, January 12th until Saturday, February 28th and revolves around concept art and naming. The goal is to gather ideas for the design and name of the Erectus™ character, the visualization of the Homo erectus. The best drawing and the best name will be rewarded with a trip to either Tokyo (Japan) or Arnhem (The Netherlands) to share the experience of the game’s launch. Anyone that participates in the contest and submits his/her ideas will receive a certain amount of in-game gold to use in the Erectus™ game and a digital medal for their player profile. If drawing isn’t your strong suit you can still enter the contest by submitting a name for the leader of the Erectus™ people. Maata Games BV will also raffle off another trip between all contestants to one of the 3 cities that the game will be launched from.

Participating in the contest

The contest details will be available in 4 languages: Dutch, English, Japanese and Filipino, and participation will be open to all. Participants under the age of 16 will need a parent/legal guardian’s consent. Participants may enter both contests and submit both concept art and a name. The requirements are minimal; you can even submit scans of sketches of hand-drawn art, as long as it conveys the idea or concept for the Erectus™ character. This way the people with good drawing skills are as likely to win as those with strong digital design skills and vice versa. Maata Games BV will announce the contest through her own website and social media channels as well as through her partners; the Informatie en Communicatie Academie van de Hogeschool van Arnhem en Nijmegen (HAN ICA), the Filipino umbrella organization ICT Davao, the University of Mindanao (UM) and the Japanese partner Akoni KK. Additional information about the contest as well as the Terms and Conditions can be found at www.erectusthegame.com, this is also where you can upload your submission(s).

The run-up to a global launch

The launch of the Erectus™ game will be held at 3 locations across the globe: in Tokyo, Davao and Arnhem. A Maata Games BV foothold is located in Tokyo. We are also cooperating with the Japanese company Akoni KK regarding the local market launch. The Filipino city of Davao is where the game is currently being programmed by five programmers in Next BPO Solutions (http://www.nextbposolutions.com), a Davao-based and homegrown Business Process Outsourcing (BPO) service provider. The Erectus™ game is, therefore, to be considered a Dutch-Filipino co-creation. Besides that, we are working towards a cooperation with the University of Mindanao (UM), the largest university of this southern island that currently holds around 30.000 students.

The online game Erectus™ is a so called MMOG RTS free-to-play browser game or massively multiplayer online game belonging to the real-time strategy genre that people can play on their internet browser on their computer or tablet. It’s a free-to-play game in which the player makes in-game purchases in order to gain certain benefits. The game is part of the Erectus™ concept with the theme being the dramatic encounter between the Homo sapiens and Homo erectus 130.000 years ago. The game will be globally released in multiple countries and languages during the course of 2015 and 2016.

The originally Arnhem-based company Maata Games BV is a marketing-driven company that was founded in May 2013. The board of directors was made up of Mr. Paul Ludwig and Mrs. Alet Ludwig. Earlier this year Maata Games BV successfully completed two public investment rounds and managed to gather € 240.000,-. Besides releasing the online game Erectus™ Maata Games BV also wishes to offer other games as well as books, movies, and merchandise. To this end, Maata Games BV recently got a local shop located in the center of Arnhem involved.

Note to the editors